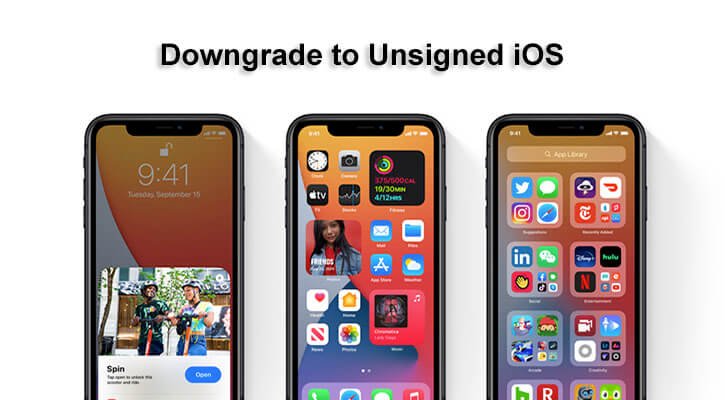 Many people find themselves excited to use a new version of iOS. This is especially true when it comes to the significant updates every year, like iOS 14, that promise lots of new features. Except, instead of enjoying those new features, you find yourself frustrated by a slow phone filled with lots of bugs.

It’s possible that everything technically works after you upgrade, but that your phone is just way too slow. Or it’s possible that some of your favorite apps aren’t jiving with the new iOS for some reason. Even more frustrating would be something like a Wi-Fi connectivity issue that makes you want to scream.

If any of these are happening to you, you should consider downgrading to an earlier version of iOS. Assuming that it’s been less than two weeks since you’ve upgraded, you should be able to do this the proper way through iTunes. But after two weeks, you will have to downgrade to an unsigned iOS.

This is a more involved process, but you will get all the information you need to downgrade if you read below.

FAQs About Downgrade to Unsigned iOS

Downgrading to an unsigned iOS can sound intimidating. So before we attempt the step-by-step process, let’s answer some of the most common questions.

1What Is Unsigned iOS?

Every version of Apple’s iOS software has a signature attached to it. The signature is a piece of code that comes from Apple’s servers, and it is what allows you to install the update.

Two weeks after an iOS release date, the signature for the older version of iOS is deleted. Unfortunately, this means that trying to downgrade to an older version will result in an error. Although it’s not impossible, this is what makes it difficult to jailbreak an iPhone.

2Is It Possible to Downgrade to Unsigned iOS?

By deleting the signature for older versions of iOS, Apple makes it difficult to downgrade. But it’s not impossible. You just can’t install it the usual way through iTunes.

Instead of iTunes, you will use a third-party application that will act as the unsigned IPSW file and blob file destination. The SHSH blob file will have the Apple signature, allowing you to proceed with the installation.

3Is It Possible to Downgrade to Unsigned iOS without SHSH Blobs?

The short answer is no. It isn’t possible to downgrade to an unsigned iOS without SHSH blobs. The SHSH blobs are the files that contain the Apple signature, and they correlate to the specific firmware and device.

So you can downgrade through unofficial means with a third-party application like FutureRestore, but you still need the SHSH blob for the firmware and the device. You have to save the blob file while Apple is still signing the version of iOS. This is how you trick Apple’s server when downgrading.

This tool, TSS saver, can help you save your blob file.

4Why Downgrade to Unsigned iOS?

There can be multiple reasons to downgrade, but the most common is that an upgrade causes your device to run slowly. Another reason might be that the update is new and it has bugs.

In this case, you probably upgraded too early and want to go to a previous version until Apple can resolve those bugs.

You May Like: How to Update iPhone to iOS 15?

Downgrade to Unsigned iOS with SHSH Blobs (without iTunes)

So to review, you can only install iOS to your device if it has the proper signature. That signature can either come legitimately in real-time through iTunes or from the SHSH blob file you saved from a previously signed version.

And without the blob file, you are simply out of luck. But if you have the blob file, read on to learn how to downgrade to an older and unsigned version of iOS.

There are four essentials that you will want to make sure you have before attempting to downgrade. They are:

Once you have these ready, there’s just one more thing to do that is an absolute must: make a backup of your device. You can back it up through iCloud and iTunes to be safe. Since restoring an unsigned IPSW is not an official process, you will have to factory reset your phone for this process to work.

2Step by Step Guide to Downgrade to Unsigned iOS

Because you are attempting a restore to an unsigned iOS without iTunes, you might have to repeat a few of these steps if there are errors. But the general workflow for downgrading is as follows:

Step 1. Put your blob file, unsigned iOS firmware, and FutureRestore file in the same folder on your computer.

Step 2. If you’re on a Windows computer, open Command-Line. If on a Mac, open Terminal.

Step 3. Take the unarchived FutureRestore file and drag it into Terminal or Command-Line. Then type -t.

Step 5. Now you can drag the unsigned iOS firmware file into the Terminal or Command-Line.

Step 6. Press Enter on the keyboard, and the downgrade process will begin.

Step 7. If you do everything correctly, those steps should work. But if you do get an error message, such as your device failing to go into recovery mode, then you can just try again. Go back to the step where you were dragging the FutureRestore file into Terminal and attempt another downgrade.

There’s probably nothing more frustrating than having an expensive iPhone, only to find out the latest upgrade made it dysfunctional. But as you now know, there are options.

Even when Apple stops signing an older version of iOS, you can follow these steps to downgrade to an unsigned iOS.

Bryan is a tech-aficionado whose superpower lies in blabbering interminably about new technologies. He is passionate about helping people solve their iPhone problems with easy and practical solutions.